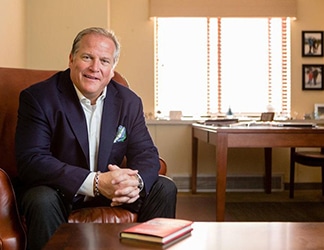 Ben Horowitz is not your regular venture capitalist.  As half of Andreessen Horowitz, one of the largest venture capital firms, he knows a thing or two about surviving the ups and downs of startup life.  Horowitz, who is also the author of The Hard Thing About Hard Things, shed some truth of being a CEO.

“Running your own company is incredibly emotionally challenging,” he said.  There was a time when he would wake up in the middle of the night trying to figure out a way to save a startup.  He admits being a CEO is something you learn on the job. Some founders of startups he has invested in never held that role previously.  “It’s easier to teach the innovator how to be a CEO than to teach a CEO how to be an innovator,” he explained. “It’s great to have someone on your board that has actually started a company and been CEO,” said Horowitz.

Since being a great leader is something that happens day to day on the job, Horowitz did have one essential tip for founders, according to MillionaireMatch. “I think people skills seem to be highly underestimated in terms of the stability to run a company,” he said. “The ability to understand other people’s motivation, those you talk to and those you aren’t talking to,” he continued.  In an article from 2010, Horowitz noted three key traits of a leader:

Now, the keyword attached to leadership is empathy.  Instead of it being categorized as a soft skill, it’s in the file of essentials if you want to be an effective leader.   Donn Sorensen, author of Big-Hearted Leadership, says that empathy is what makes one organization outperform another. Sorensen writes in the section of his book titled Value Vulnerability, “Instead of being the kind of leader who makes him or herself unapproachable or unassailable, you should be the first person to say when you’ve screwed up.  In other words, give them your weaknesses, not just your strength.” Sorensen lays out what qualities a great leader should have which includes genuineness, integrity, emotional intelligence, resolve, courage and most of all tenderness and enthusiasm. “The common mistake is they focus on themselves and their own success, trappings of the office and return on investment.  Those may be fine, however a CEO will not be highly successful unless they focus on their people and put them first,” said Sorensen.

As businesses try to stay afloat in a quickly changing economy, leadership will be something to look at.  It may not be the obvious choice beyond numbers, labor and revenue, but it all comes down to what type of leader is pushing the pack.

Joresa Blount is the founder of GoFlyy, an author and creator of Brown Girls Innovate too which provides tools and connections for women in tech.