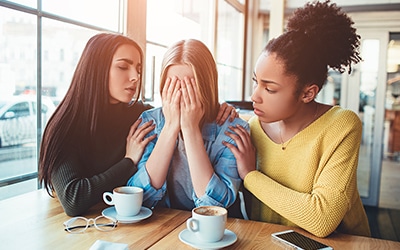 “Compassion hurts. When you feel connected to everything, you also feel responsible for everything. And you cannot turn away. Your destiny is bound with the destinies of others. You must either learn to carry the Universe or be crushed by it. You must grow strong enough to love the world, yet empty enough to sit down at the same table with its worst horrors.”

– Andrew Boyd, Daily Afflictions: The Agony of Being Connected to Everything in the Universe

I was 30, a wife and a new mom, frazzled and exhausted when I joined a therapy group for personal growth and socialization. I loved this group of women from the start. They were warm, open-minded, accepting and best of all authentic, which was hard to find living in rural East Tennessee.

Several months after I had joined the group we went to the mountains for a weekend retreat. This was awesome! There was silence, great food, hot tubs, yoga, relaxation, and really deep discussions about spirituality. We all shared stories, many of which had a lot of emotion. I listened, laughed and cried along with the other women.

During a break, I decided to go for a walk, my head was spinning, I felt really out of sorts for no particular reason – I needed some space to clear my mind. When I got back to the cabin the therapist/group leader, pulled me aside and asked me why I cried when Suzy was telling her story? I didn’t know how to answer; isn’t it obvious? “Ummm, because it was sad.” I didn’t think anything of it, doesn’t everyone cry when someone else is sad?

“Empathy or emotional contagion is when someone feels another’s emotions, like a shared energy”

She pressed on, asking if I had experienced something similar to Suzy that triggered my tears. “No.” I responded. She said, “I’ve been watching you in group and I think you’re an Empath. “What do you mean?” I asked. She told me a little bit about it; it’s when someone feels other people’s emotions, like a shared energy. This sounded way too “new-agey” and a little like a psychic, something that I was sure had no scientific backing… so I didn’t give it much credence. But, I did start to pay attention to my emotions while I interacted with others.

This began my decade-long endeavor to understand empathy and the role it plays in my life and relationships, and the role it’s currently playing in society via media and screens.

Get the app now!